This reflection by Aimée Mitchell is in response to the Analogue Film Gathering that took place 23-24 March 2016 in Calgary, AB. 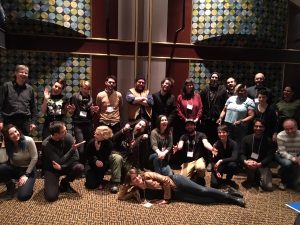 Participants at the Analogue Film Gathering

This past March, I joined representatives from across the Canadian media arts sector who gathered in Calgary to discuss the ways in which the media arts sector can continue to support the production, exhibition, and preservation of analogue film. It was a chance for those engaged within this network to voice concerns and strategize a focused way forward together with the Independent Media Arts Alliance (IMAA). Staff and board members from production and distribution centres, alongside folks from film collectives and our last standing film labs in Canada were present. For two days we addressed the specific needs of analogue film from on-the-ground perspectives, and brainstormed ways forward in regards to sharing and accessing resources, approaching funding bodies for preservation support, and addressing the need for equity and outreach within the sector both for staff and the communities they serve.

The gathering coincided with the Calgary Society of Independent Filmmakers (CSIF) $100 Film Festival, which happened to be celebrating its 25th anniversary. The festival is one of the few in Canada that solely showcases the work of small-gauge film on film – a poignant and complimentary event that put into practice some of the concerns raised during our daytime sessions.

So after a day of thoughtful discussion, we found ourselves immersed in film and critically engaging with the very medium we spent the day unpacking. Those in the media arts sector understand better than anyone the immense labour that lives within a finished film print running through a projector. But there was something about the proximity of our discussions and engaging with film each night that amplified the network of labour for me. Mostly, it allowed me to consider the ways in which the sector operates as an ecosystem with internal and external forces impeding on its ability to thrive.

What follows here is a recap of the questions, concerns, and suggestions that emerged from the two-day gathering – through the lens of safeguarding analogue film practices and preservation within the media arts sector. This look back at our discussions reveals the gaps and lacks – where we need to learn from failures in order to move away from systems perpetuating inequity and consider whose voices are being safeguarded.

Since the Analogue Film Gathering, movement has been made on a few fronts in terms of advocacy and organizing. A group of attendees at the gathering have continued the conversation on how the sector can move forward on the issues raised this past March. Discussions have been focussing on how a larger national or international gathering could take place within the next few years. While ideas are still in the brainstorming stages, the momentum created by the Analogue Film Gathering is still resonating with participants and calling them to action.

In addition, many of the distribution centres and media arts organisations have also been invited to participate in a SSHRC Partnership Grant spearheaded by Professor Janine Marchessault at York University. I had the opportunity to work on this grant application as an administrator, and once again was inspired by the immense amount of enthusiasm within the media arts sector to come together and share expertise in safeguarding the ecology of the network. Archive-Counter Archive: Activating Canada’s Moving Image Heritage (A/CA) is a 6-year research-creation partnership that seeks to address the crisis facing Canadian audiovisual heritage through a systematic, multi-institutional plan for facilitating public access and public policy. A/CA seeks to activate Canada’s most precarious audiovisual heritage by studying and engaging with a selection of case studies at Canada’s artist-run centres including the Canadian Filmmakers Distribution Centre, Groupe Intervention Vidéo, Urban Shaman, VIVO, Vtape, and the Winnipeg Film Group. These case studies will encompass media arts made by women, Indigenous peoples, the lesbian, gay, bisexual, transsexual, two-spirited and queer (LGBT2Q) communities, and archives from Canada’s immigrant communities. The project hopes to foster an audiovisual archive network in Canada, linking community archives to citizens, researchers and policymakers to identify the needs of audiovisual preservation across different community contexts, and illuminate the challenges and epistemologies that surround 21st century archives. The success of this grant would strengthen the audiovisual preservation advocacy that IMAA and the sector continues to move forward on. The much anticipated outcome of this project proposal is expected in late March 2018.

Returning to the metaphor of the ecosystem to discuss safeguarding analogue film in all its capacities: the 21st century is deeply invested in models of sustainability that involve everyone doing their part to save, reserve, or protect resources. If we think about analogue film as an ecosystem that needs to be revived as a cultural resource, then there needs to be strategies and resources implemented and shared to sustain the system in a way that serves all parties involved. The Analogue Film Gathering enabled the sector to gather an overview in order to move into action. Activating the media arts network requires both professional and unrecognized skill sets to work together – those within our formal media art spheres, but also those who continue to be left out. These conversations are integral moving forward. Agency must be felt within the network of the ecosystem in order to keep the environment active, vibrant, and growing.

Lastly, my perspective and position within this ecosystem at the time of the Analogue Film Gathering was from the standpoint of a film distributor and collections manager at the Canadian Filmmakers Distribution Centre (CFMDC). I have since left my post at CFMDC, but continue to find myself connected to the community in my other capacities as a projectionist, programmer, academic, and media arts advocate. I have cared about the living and active legacy of unique film prints from these views: as someone who works with artists to safeguard their work while also keeping it in circulation, as the person trusted to inspect, thread, and project artisanal prints, as a programmer who respects the artistic choices of a filmmaker wanting to screen their film on film, and also as a scholar interested in the history, politics, and day-to-day practices of audiovisual preservation in Canada. From these various perspectives I have reflected on the March gathering, and the network that supports the artists who continue to experiment with analogue film. I look forward to witnessing and participating in future gatherings to build on the momentum that this event ignited.

Aimée Mitchell is the former Distribution and Collections Manager at the Canadian Filmmakers Distribution Centre. She is currently the Project Manager for the XL-Outer Worlds Project, which is commissioning five Canadian artists to create short large-scale films inspired by the invention and technology of IMAX. She is a MITACS Post-Doctoral Fellow at York University, where she is researching the early history of IMAX, and the reconstruction of this history through traces from personal fonds and counter archives. She holds a PhD from the York and Ryerson University Joint Communication and Culture Program. Her dissertation explored the politics and practices of audiovisual archives in Canada, and more specifically, the importance of DIY archiving practices in its various forms. She was an archival researcher and contributor to the book Reimagining Cinema: Film at Expo 67 (MQUP 2014). She is a collective member of the Toronto Queer Film Festival, which showcases contemporary, innovative, queer and trans film and video art, and also a board member of the8fest small gauge film festival. She is an advocate for media artists of all gauges and mediums. 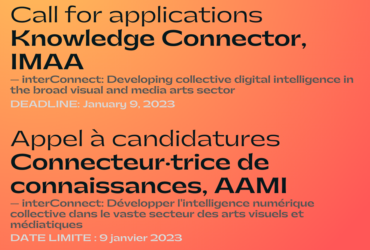 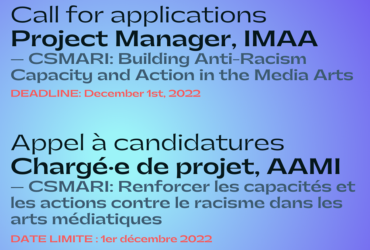