The Third Annual Symposium on the Future Imaginary

This reflection by Adrienne Huard is in response to the 3rd Annual Symposium on the Future Imaginary that took place in November 2017 in Winnipeg.

This past November, the Winnipeg Art Gallery hosted the 3rd Annual Symposium on the Future Imaginary, which successfully amassed Indigenous scholars, artists, technologists, activists and members of the community in order to examine and discuss the outlook of Indigenous futurity. This was accomplished through incorporating new media, technology, innovation in conjunction with traditional knowledges, language revitalization and consultation from the community.

The symposium was kicked off with a screening of Skawennati’s Time TravellerTM series, followed by a panel discussion with collaborator Jason Edward Lewis, Chair in History of Indigenous Arts in North America Dr. Julie Nagam, new media artist Scott Benesiinaabandan and of course, Skawennati. The discussion was the ideal entry point to the symposium as it indicated what the remainder of the week would entail. They spoke of Indigenous knowledge and how to incorporate that into digital medias. With guidance from the Indigenous community and elders, they reveal new self-reflection of Indigeneity: one that surpasses Western narratives to create international platforms for healing and knowledge sharing.

Meanwhile, the first official day of the Future Imaginary symposium came two days later. The event welcomed the guests with a song sung by Métis artist Cheryl L’Hirondelle and Plains/Woodland Cree storyteller and actor Joseph Naytowhow. Dr. Julie Nagam opened with a discussion on colonialism within the art institution and how new media challenges these notions. She proceeded to explain that digital technologies surpass Western concepts of linear time and that it refuses the colonial binary of savage versus civilized. The idea that Indigenous people are “frozen in time” perpetuates inaccurate representation of Indigenous cultures and therefore is detrimental to the process of reconciliation. When Dr. Duke Redbird provided a Skype-in lecture, he explained the necessity of switching from colonial vision to an Indigenous worldview with innovation because that can offer sustainability in our Western world.

New media, such as games and graphics, can be considered methods of creating awareness for non-Western ways of life and representations of diversity. It allows for interactivity as a means of generating conversations among participants. By including storytelling, land-based epistemologies, guidance from the community, and by prioritizing Indigenous languages, we can utilize technology as a decolonial tool that allows us to delve deeper into our cultures. During the discussion titled Technology as Decolonial Tools, Scott Benesiinaabandan explained that digital media surpasses white-walled art institutions, that it is a portable method of art display that can facilitate accessible education platforms to our communities. Additionally, technology can strengthen bridges between communities by encouraging communication to distant relations across the globe. Meanwhile, graduate student of University of Hawai’i of Manoa Daniel Kauwila Mahi recognized that video games cultivate decolonial and sovereign potentialities, and through re-constructing coding through Indigenous languages (specially Hawai’ian), we can begin to dismantle colonization from the very foundation of the language of technology. Lastly, art historian Dr. Jolene Rickard stunned participators with her knowledge of past, present and future Indigeneity while inflecting Indigenous perception of non-linear concepts of time. She demonstrated this through the Haudenosaunee creation story of the Skywoman, providing evidence that Indigenous peoples are perpetually considering notions of the future. From the two colours of the Wampum belt, to the DNA of a birch tree, to binary coding, Rickard confirmed that the past, present and future are constantly working in conjunction to manifest fluid representations of time alongside land-based knowledges and histories.

The last day of the symposium consisted of a showcase of Indigenous-developed technologies, such as virtual reality and videogames. A selection of interactive works by digital media artist Elizabeth LaPensée lined the entrance of the Winnipeg Art Gallery, while a side room led you to participate and engage with virtual reality artworks, Kent Monkman’s The Honour Dance and Scott Benesiinaabandan’s Blueberry Pie Under the Martian Sky. Meanwhile, the main area offered a variety of innovative works such as Ogoki Language Inc.’s Ojibway Language App, an app that facilitates proper pronunciation while educating participants on Anishinaabe culture and important phrases. Additionally, the Ojibway Language App was designed to operate without an Internet connection due to the limited internet access of remote communities, advocating for a prioritization of the language across the nation.

The symposium invited Indigenous perspectives from all over the globe, from New Zealand, to Hawai’i, to the Arctic. However, the collective consensus is that Indigenous sovereignty is the most integral aspect to our culture preservation, revitalisation and maintenance. Digital artists are demonstrating that through the fusion of technology and innovation with storytelling, language revitalisation, ancestral knowledge and consultation from the community, new media can be used a decolonial tool in order to facilitate the ongoing process of reconciliation for the Indigenous population.

Adrienne Huard is an Anishinaabekwe currently based out of Tiohtià:ke (Montreal), Quebec. She is completing her Bachelor of Fine Arts at Concordia University, focusing on Indigenous art history while incorporating methods of decolonization within the art realm in order to ensure reconciliation for the community. She has been published in Canadian Art magazine and Red Rising magazine and will be pursuing her master’s degree this fall. 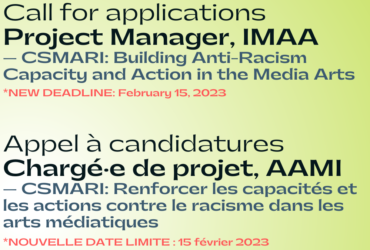